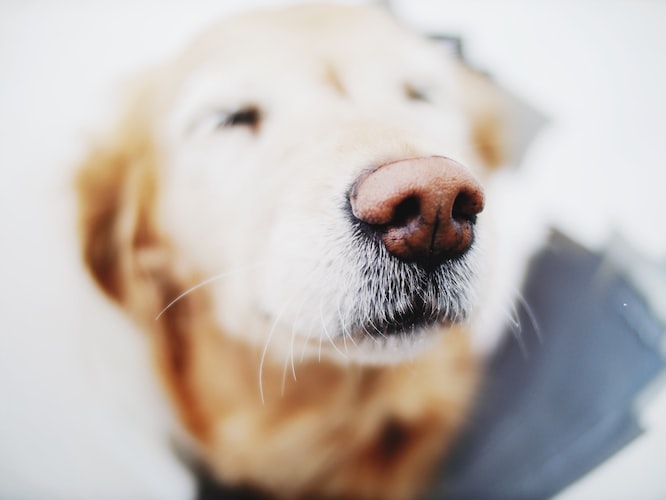 Dog lovers all around the world enjoy the loving wet nose that accompanies a sloppy kiss. But, have you ever wondered why that nose is wet? Winslow Animal Hospital is here to give you the scoop on your pup’s wet nose.

To get started, what does your dog’s nose do?

A dog’s sense of smell is very important to help them asses and discover the world around them. In fact, a dog will focus more on what they smell rather then what they see. Your furry friend’s nose is directly linked to their survival instincts, with over 100 million receptors to help them get as much information as possible. Their sense of smell is strong enough that they can the pick up very minute scents and work out where the scent is coming from within their environment. Their noses are able to separate air. So, not only are noses for breathing, but also for respiration.

Why are they wet?

Now to the question of the hour, why are the wet? This is actually for a couple of reasons.

How they get wet noses:

Despite popular belief, a dry nose isn’t necessarily a bad thing. There are so many possibilities as to why your dog might have a dry nose besides illness. Heat, napping, and not licking for a little while could all be causes of a dry nose. Plus, some breed just naturally have drier noses then others.

As long as your furry friend is acting normal, then a dry nose is perfectly fine. However, if it accompanies other symptoms such as loss of appetite or if the nose becomes cracked or sore, consult a veterinarian.

Can a nose be too wet?

If your dog’s nose is overly wet then there might be a problem. If the nose is producing too much mucus, it is thick, or discolored there is a good chance that your furry friend has a respiratory infection or some other related problem. If you notice any of these symptoms, please contact your veterinarian.