Melinda Koehler was in tears as she tried to understand what WAH doctor, Dr. Sandra McBee, had just said. Amputation? Dr. McBee explained that the infection in two-year-old border collie Tucker’s right hind leg had spread like wildfire.

“The skin is necrotic [dead] and the infection has extended to the inguinal area,” said Dr. McBee.

Dr. McBee went on to offer Melinda too options: daily bandage changes under sedation with aggressive multimodal therapy all lasting several months (if it even worked), or amputation of the leg—tomorrow.

“We didn’t have time to waste. If the infection spread any higher up the leg, he could’ve potentially gone septic and then it was highly likely he would not survive,” Dr. McBee explained. “There was no guarantee that the bandage changes were going to work and if it became clear we weren’t stopping the infection, then Tucker would wind up 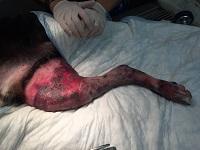 getting the amputation anyway.”

Melinda was in shock. Alone, and desperate to make the right decision, she wrestled with her own beliefs and those of family members who were offering their thoughts over the phone.

“I first thought ‘Oh my God, I can’t afford this. Would it be better if he was put down?’ Amputation was so scary because I thought ‘he had four legs; he should have four. It’s not a religious thing it’s just my mentality that he should continue to have four legs and what kind of quality of life would he have on just three?”

What changed her mind?

“My daughter called me on my cell phone and saw that I was crying on video chat so she hung up and called me back and asked what happened, and I was telling her that they wanted to take his leg and she was like ‘Mom, really? He’s got three more.”

Tucker stayed overnight at WAH and was given a powerful pain medication. The next day, his right hind leg was amputated. The crazy, unstoppable, young border collie would now have to learn to live life on only three legs.