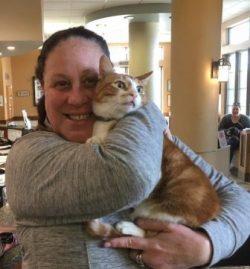 On a rainy day four years ago, a Good Samaritan spotted a kitten in the middle of Berlin – Cross-keys Road. She stopped to make sure he didn’t get hit by a car. Another bystander pulled out a blanket to scoop him up in.  The Good Samaritan brought him to be examined by a veterinarian at the nearest animal hospital: Winslow Animal Hospital! The poor little kitten was a dirty, greasy mess and had a cut lip.

The veterinary technicians at Winslow Animal Hospital got him cleaned up quickly. Some suds and scrubs got this little orange fluffball looking much better.  The problem was, he still did not have a home. The Good Samaritan was not planning to add to her family at that time.  Fortunately, she picked the right animal hospital to bring him.

The long time feline resident of Winslow Animal Hospital, Jack, had passed away shortly prior.  It did not take long for Dr. Philippe Coudrai to see how special this kitten was, and that he could become a new hospital cat.  We began discussing names and eventually decided on “Butters.”

Butters became a part of the Winslow Animal Hospital family. Recently, the Good Samaritan who rescued Butters returned to our hospital and took a photo with him! We are grateful that Butters was brought into our lives.