Pictured above is Dr. Coudrai with Inky, a very special kitten. Joa’s Arc, a rescue for special needs animals, came to Inky’s aid when a local shelter asked for help with a small kitten with a fractured leg. They got Inky to a vet for emergency care immediately. It was originally thought that the fracture was stable and that splinting for six weeks would be enough to heal the damage. Unfortunately, during that initial recovery, Inky’s glucose crashed days later and she had to be stabilized overnight. By the time Inky had a couple splint changes, it was clear her leg was in bad shape. Her tibia fracture was displaced, her fibula was also fractured, and her hip was dislocated. The vet recommended amputation of the leg. 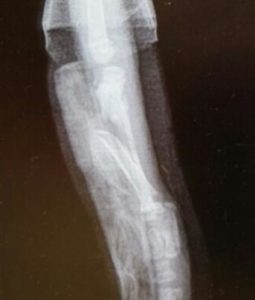 Joa’s Arc brought Inky to Winslow Animal Hospital to see Dr. Coudrai, who is well-known for his orthopedic surgeries on dogs and cats. Rather than amputate, Dr. Coudrai performed orthopedic surgery to repair the leg last week. He placed four pins to hold the bones in place and allow Inky’s leg to heal. 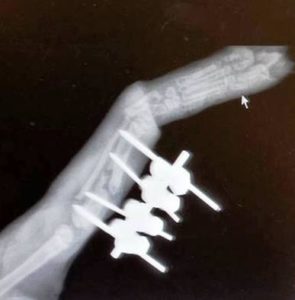 Inky has been recovering well and is able to move and explore, despite having so much added weight to carry around for now!