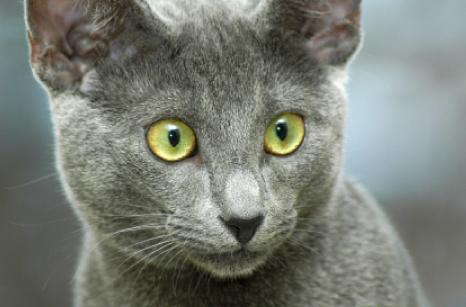 Hepatic lipidosis, or fatty liver, is a fairly common severe liver disease in cats. The liver has a number of functions, including detoxifying the body and producing proteins and chemicals used for digestion, blood clotting, and breaking down fats.

When a body is undernourished, it automatically moves fat from its reserves to the liver to be converted into lipoproteins for energy. Cats do not convert large stores of fat into energy as effectively as other animals. When a cat is in starvation mode, the fat that is released to the liver is not processed efficiently, resulting in a low functioning fatty liver. As fat accumulates in the liver, it becomes swollen and turns yellow. The liver is no longer able to process red blood cells efficiently, leading to a yellow pigment from the red blood cells being released into the bloodstream, yellowing the eyes. If not treated promptly, fatty liver can lead to various complications and eventually death.

Cats require a high amount of protein in their diets. They are carnivores, and need to eat meat. A lack of protein or inability to process proteins quickly enough leads to malnutrition. Stress and hormonal disturbances can affect the appetite, which in turn can affect fat metabolism and cause fat mobilization from other parts of the body to the liver. It can also occur alongside illness, changes in diet, diabetes, kidney disease, cancer, aggressive weight loss attempts by owners, and missing meals because of being lost. Middle-aged cats are most affected.

If your cat may have fatty liver, you will need to give as thorough a history of your cat’s health, onset of symptoms, and possible incidents that may have preceded the disease process. This information may give the veterinarian clues as to which organs are causing secondary symptoms, and what underlying condition might have led to the fatty liver. Routine lab tests may reveal red blood cells of abnormal size and destruction of red blood cells, as well as other clues to fatty liver.

Imaging tools, such as ultrasound or x-rays, can be used to study the abdomen for clues about the liver. In order to confirm the diagnosis, your veterinarian will need to take a sample of liver tissue for a biopsy.