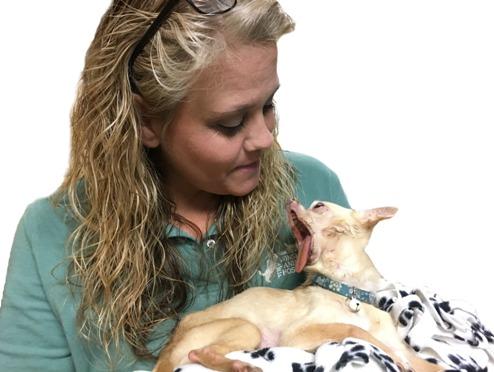 Edgar is a very special dog. His story begins when he was found in Willingboro in 2013. He was taken to the animal shelter there. Edgar has special needs: he has no lower jaw. We believe this is the result of trauma he suffered earlier in his life. Soon after he was found, he was introduced to Karen Quigley, who is known for her work and companionship with Elwood, another very special dog who won the 2007 World’s Ugliest Dog title and went on to participate in numerous events, raising funds and advocating for animal rescue groups and nonprofit organizations.

Karen found a home for Edgar with a terminally ill woman named Janice. Janice spent a lot of her time in bed and was not doing very well. She needed that added companionship and mutual care that she found with Edgar. Sometimes he would cuddle with her in bed, other times they would spend the day out on the patio enjoying the fresh air along with one another’s company. Karen would ask about the pair from time to time, and found that Janice and Edgar were inseparable. They had become each other’s whole world. No one was sure what would happen, since Janice was ill and Edgar’s age was unknown, though he appears to be a senior (dogs are generally considered senior pets around 7 years of age, depending on the breed).

Though Janice had only been expected to live another few months, Janice was able to share 3 precious years with Edgar. Sadly, last Thursday, Janice’s time in this world came to an end. Edgar was there to comfort her in her last days. Edgar is currently staying with Karen. Karen has said, “There is no doubt in my mind that Edgar being with her extended [Janice’s] life from 2013 to 2016.”

In the past few days, Edgar has been having some health problems. Karen knew bringing him to the doctors at Winslow Animal Hospital would mean providing this remarkable dog with the detailed attention a senior pet needs in order to be well. Edgar was examined by Dr. Sheila Levie today. His blood is being tested with a Complete Blood Count (CBC) and other tests to make sure he is healthy.

Having a pet dog or cat can make a world of difference for any home. It certainly did for Janice. Rescuing a pet can make a world of difference for that dog or cat. It certainly did for Edgar. And when that special bond is made, it’s important to provide quality veterinary care for the pet. We are proud to provide that care for pets like Edgar. At Winslow Animal Hospital, we care for your pets as if they were our own!