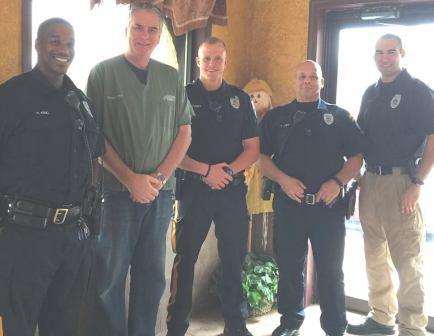 With the ongoing tension between some police departments and communities nationwide in recent years, many people have been looking for ways to promote peace and reduce fear. As part of the nationwide conversation on re-establishing trust between police and communities they serve, Winslow Township Police hosted “Coffee with a Cop” – a casual event free from speeches and agendas, inviting community members to sit, ask questions, share concerns and get to know the officers who protect and serve their community.

Dr. Philippe Coudrai of Winslow Animal Hospital took time out of his Saturday morning to have coffee with the officers at Winslow Family Restaurant. He and the rest of the Winslow Animal Hospital team are committed to community outreach. It’s important to us to build relationships with the people around us so we can provide the best veterinary care possible for our community.

Coffee with a Cop is not the first step the Winslow Township Police Department has taken to improve relationships with the community. They are also involved in National Night Out to improve community-police relationships and stand together against crime.

Additionally, Police Chief George Smith and citizen Andre Fooks started #PicsforPeace. In the aftermath of police involved shootings this past summer, Fooks and his friends went to the police department and asked to speak with the chief. Both parties expressed their grief over what had happened and their desire to spread a message of peace. Through that conversation, they began what would become a viral hashtag effort to encourage people to meet others, especially others who are different than themselves and police officers, and take photos together.