Bandit is a handsome and lively 21-month-old Husky/Lab mix. He enjoys meeting new people and exploring his environment.  His spunk, enthusiasm and curiosity make Bandit a special dog, but they also get him into trouble.  Bandit’s owner brought him to Winslow Animal Hospital with a very serious problem – he had attempted to swallow a ball! The ball became lodged in Bandit’s throat. Thankfully, Bandit was still breathing somehow and was still standing when he arrived at our Sicklerville, New Jersey veterinary practice.

Our team got to work right away to address this life-threatening problem. Bandit was given an IV and sedated so Dr. Kate McDermott could begin the process of removing the ball safely. Dr. McDermott used forceps to reach the ball and begin to pull it out, but a new problem arose: every time the ball began to be dislodged, Bandit took a large, involuntary breath in that sucked the ball back into place!

Kathy, one of our client service representatives, saw what was happening in the treatment area. She astutely commented, “we need something like salad tongs!” One of the veterinary technicians considered her suggestion and went to the surgery suite to find forceps with more grip. Thankfully, this newest attempt was successful and the ball was dislodged. However, by this time, Bandit was struggling to breathe.  The team hooked up the ventilator to provide the assistance Bandit needed. 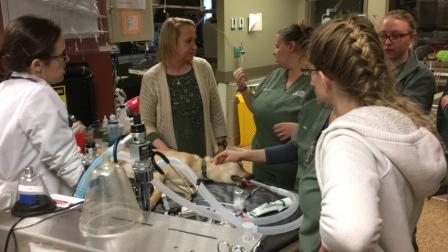 With Before long, Bandit was up and greeting the Winslow Animal Hospital team with his tail wagging! Though he had had a rough day, Bandit still maintained his enthusiasm for life and curiosity about his environment that make Bandit so special.