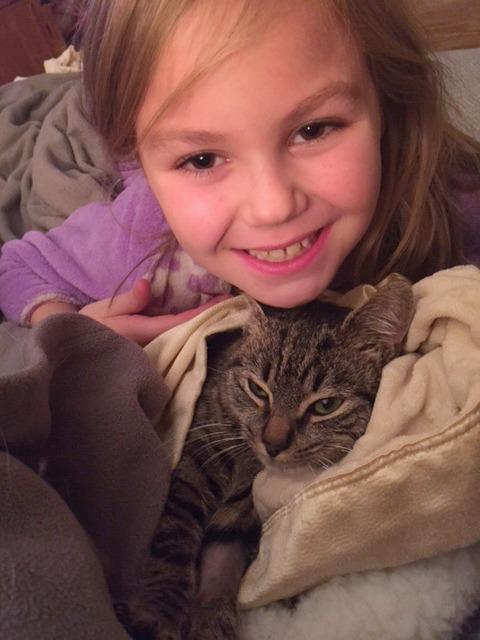 Dawson sure has grown a lot this year! We shared Dawson’s story last November, and he has been doing well since! Dawson is a domestic short hair cat that had been found near Winslow Animal Hospital with an injured rear leg late last fall. He was very fortunate to be rescued, since there was a lot of snow in the area not long after he was found! One of our staff members saw a figure lying in the grass that scooted away as she got close. While she initially thought it might be a bird, it turned out to be Dawson scooting his way into the woods.

In addition to his injured leg, Dawson had a prolapsed rectum and diarrhea. A prolapse occurs when tissue of the rectum is displaced out through the anus. In this case, the prolapse and diarrhea symptoms were caused by intestinal parasites. These disease causing creatures infect many, many cats, especially kittens and those which have not been treated by a veterinarian. Intestinal parasites feed off of their host, sometimes causing no noticeable symptoms for a long time, other times leading to digestive problems and malnutrition.

Intestinal parasites can also pose a threat to people. They can be zoonotic; that is, they infect humans and animals alike. For those reasons, we recommend annual parasite screenings by bringing in a stool sample. When intestinal parasites are detected in a pet, as they were with Dawson, the pet is treated with oral medication that kills the parasites. Once they are gone, the body has the opportunity to heal.

Dawson’s troubles were not limited to the parasites. He also had an injured leg when he was found. However he was injured, the damage was extensive enough that Dr. Coudrai had to perform an amputation on some of the digits of that back leg. Despite all he has been through, this cat has found a very loving home with Jennifer B, our reception team leader. With her attentive care, he has been able to recover from the health issues that plagued him last year. Dawson is full of love and always brings a smile to the faces of those around him.