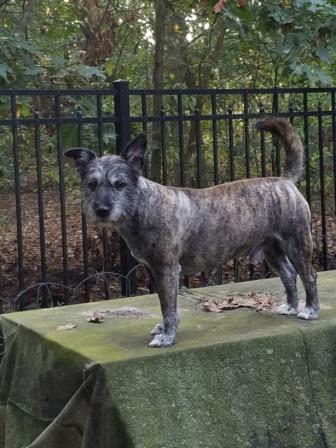 Finding a lump on your pet can be very scary; Cody’s family was faced with this experience earlier this year.  Cody’s owners found a small hard lump on his left front leg and made an appointment at Winslow Animal Hospital right away.  When Dr. Hinze saw Cody he was behaving normally, but the lump was very worrisome!  Dr. Hinze suggested that radiographs be taken of Cody’s leg and asked for a second opinion from Dr. Philippe Coudrai, who performs orthopedic surgeries at Winslow Animal Hospital to see if this was possibly something he could remove and biopsy.  Hard bony lumps can be quite concerning due to the possibility of Osteoscarcoma, a very aggressive form of bone cancer that is diagnosed in 8,000 – 10,000 dogs on average each year in the US. Osteosarcomas account for about 85% of all canine bone tumors.

Some of the symptoms of Osteoscarcoma can be, but are not limited to:

Large breed dogs are usually at higher risk for developing Osteoscarcoma, while dogs under 30 pounds account for less than 5% of all Osteoscarcoma cases. This was good news for Cody, since he is a 24 pound terrier mix! After seeing Cody’s radiograph, Dr. Coudrai felt that getting a large enough sample to biopsy would be possible. Surgery was scheduled at his owners’ convenience.

On the day of surgery Cody was not allowed to eat breakfast, because we didn’t want him to get sick and vomit in response to anesthesia.  (He wasn’t very happy about that!)  One of our surgical nurses checked Cody in for his stay and made sure his entire family’s questions were answered.   Cody was brought back to see Dr. Coudrai for his pre-surgical exam and was given the “OK” for anesthesia.  Cody was given a pain medication and allowed to relax until his scheduled surgical time. When it was Cody’s turn, he was brought to the prep area where an IV catheter was placed, he was sedated and a tube was placed down his trachea to ensure he had a secure airway for surgery.  The area over his tumor was shaved and cleaned.  He was then taken into the sterile surgical suite and given a surgical scrub of the area.  Once surgery was underway, Dr. Coudrai found that he could do better than just take a piece of the mass for biopsy – he could remove the entire growth!  Once the tumor was removed, it was placed into a biopsy jar and sent to the lab. Cody had sutures placed that would come out in 10-14 days and was sent home with an antibiotic and some pain medication.  Pathology reports can take 5-10 days to get results under normal circumstances. Sometimes highly calcified masses such as bone can take longer. After 8 long days of waiting, Cody’s parents got the news they were eagerly waiting for: his mass was benign and there was no sign of cancer!  He is now living it up and enjoying life with his very happy and grateful family.