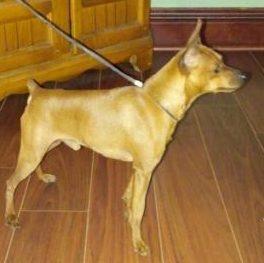 This miniature pinscher, Buster, has something to be thankful for. Last weekend he won Best of Winners for his first AKC Point! He really came through and showed his talent to the American Kennel Club.

A few months ago, that may not have been possible. Buster was injured – he broke his leg! Our colleagues at East Oak Veterinary Hospital recommended Dr. Coudrai for Buster’s fracture repair orthopedic surgery. Buster came to Winslow Animal Hospital in August to have his leg repaired. The procedure went really well. Cryotherapy (cold) and laser treatments were applied post-operatively, and the limb was placed in a soft padded bandage. Buster’s recovery is going splendidly. Congratulations, and best of luck with all your future shows, Buster!

Update: Buster is a winner yet again! As you can see by the photo above, he won Best of Winners again last year at the Greater Philadelphia Dog Fanciers Association. To see more about Buster’s journey (including his 2 majors in February), check out Dotty’s Blog