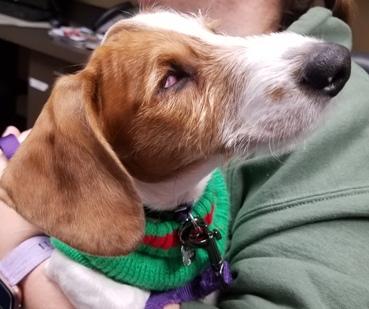 In Roman Mythology Aurora was the goddess who brought the first light of a new day.  A very fitting name to a little dog who brings so much joy and light to those she meets.

One of our veterinary technicians, Shelly, had just gone through tragedy when she met little Aurora.  Shelly had contacted Aurora’s breeder to express her interest in her new litter of dachshund puppies. After waiting for a response, the breeder finally got back to her to tell her she had a very special dog that she thought would be perfect for her. The thing was that this puppy was blind.

However, their first meeting was nothing short of magical. Aurora “hugged” Shelly upon first meeting her and Shelly just knew that she had to bring Aurora home.  They had found a new beginning in each other.

Now, Shelly plans on having Aurora go through training to become a therapy dog so she can bring in a brighter day for other people.