There is a web site called tripawds.com that was created in 2006 by a California couple whose dog, Jerry, had his right front leg amputated because of bone cancer. Today that Tripawds community has more than 14,000 members. That’s a lot of three-legged dogs! Odds are, there are many more “tripawds” out there and now Tucker Koehler is one of them.

On the same day of his surgery to remove his right hind leg, Tucker went home. In fact, he was hopping all over the treatment area of WAH as if losing a leg was something that happened all the time. When his mom, Melinda, came to pick him up, she knew instantly that she had made the right decision.

After losing his leg, Tucker received many visitors and well wishes, and he relished all the attention. The biggest challenge for Melinda was keeping him still. Tucker wanted to do all the running and playing he did before the accident, but Melinda knew he had to heal first. 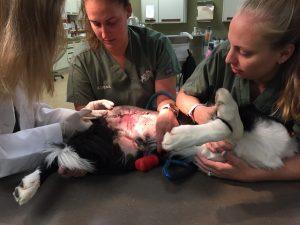 Above, Dr. McBee removes the staples from Tucker’s incision with the help of Alyssa and Candace.

Tucker did heal, and with minimal concerns. The staples are out, the medicines are done, the cone of shame is off. Melinda documented the whole experience on Tucker’s own Facebook page: Tucker’s new life with 3 legs. Followers can also learn about the next leg of Tucker’s journey (see what I did 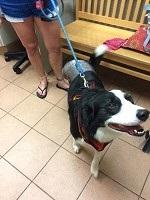 there?) as Melinda prepares to make him a therapy dog for amputees. She’d like to take Tucker to visit veterans, children, and anyone who has lost a limb.

Tucker and witnessing his joy and acceptance of having only three legs will inspire and comfort people.

There’s a video on Melinda’s phone of a little three-year-old boy meeting Tucker and in it the boy is laughing and laughing and Tucker is delighted. It’s clear that the child never notices what Tucker is missing. Just all that he has.