What happened first was something that happened almost daily at the Koehler home. The Koehler’s “mastador” (Mastiff-Lab mix), Makita, caught sight of a critter while roaming the back yard and went tearing after it; Tucker followed. Then came the yelp. Melinda immediately called out for the dogs but neither came. When she went to investigate, she saw a four-foot section of their white vinyl fence knocked down to ground; what she didn’t see was either of her dogs. So, she kept calling for them. Minutes later Tucker came back and promptly led his mother to Makita who was desperately trying to get under a neighbor’s shed—and probably to the object of her desire. 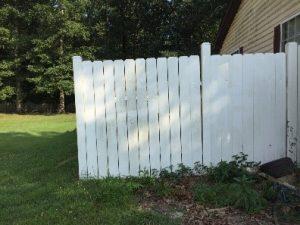 On the left is the section of fence Makita and Tucker broke through.

Melinda noticed Tucker’s limp right away. He was limping on his right hind leg, but Melinda could find no evidence of a wound. Maybe a sprain? A pulled muscle?

Whatever it was, the limp was markedly better by the next day and Tucker was happily running around as usual.

By the next morning, though, Tucker’s leg from his foot to his hock (ankle), was swollen. Melinda iced it and read online that water therapy helps pulled muscles. So, she took Tucker into their above ground pool

and had him swim around a little. When they got out of the pool, Melinda started massaging Tucker’s leg and noticed she had effortlessly pulled out a clump of his hair.

“That’s when I saw the hole,” she explained. It was no larger than the tip of a metal nail. There was no redness, no oozing, no bleeding. Tucker seemed unfazed. She applied Neosporin and placed a light bandage on the wound. Goofy dog, she thought.

We saw Tucker the next afternoon, which was now four days after Melinda heard him yelp. At this point the little puncture wound was warm to the touch and very red and Melinda feared he had broken something. Dr. Jennifer Chachkes examined the wound, which now encompassed both the lateral and medial aspect of the right hind leg. She clipped the area and flushed the wounds; gave Tucker a pain injection; placed a bandage; and sent Melinda home with antibiotics and this warning: If the wound leaks through the exterior blue bandage, come back to the hospital immediately.

The wound never leaked through the bandage–it oozed out of the top and bottom of it.

Things had just gone from bad to much, much worse.